The Streamlight Sidewinder Boot is a high quality boot light that excels while at home or camping.

You can buy this Streamlight Sidewinder Boot Light from eBay and Amazon: 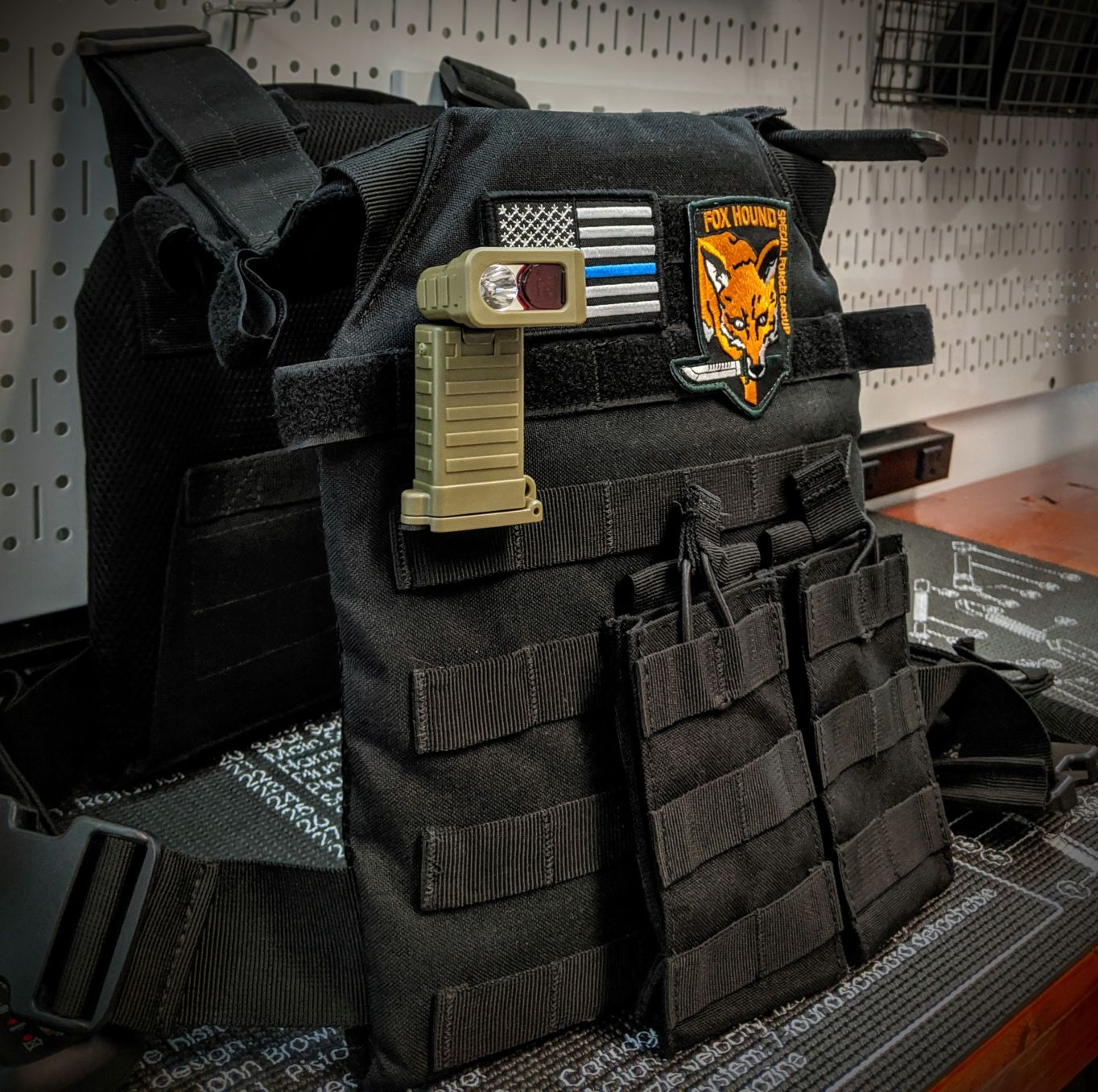 First impressions of the Streamlight Boot

My first impression of this Streamlight Boot was underwhelming. Looking at the stats it produces 55 lumens at eight hours on high or ninety hours on low. It has a 185-degree tilting head and it uses 2 AA batteries which I did find advantageous since most electronics don’t use some of the specialized batteries required by many flashlights. The slide across red filter intrigued me and so did the clip.

The Streamlight Boot came with its own batteries. The installation setup was pretty straight forward. There’s a small screw on the bottom of the light which releases a base plate that flips over, allowing you to install the batteries inside the body. Initially, the installation was a bit difficult because there’s no apparent direction showing which way the batteries went in. I used the trial and error method until I got the light to work. I then secured the base plate back to place with a set screw. It wasn't until later that I saw markings along the side indicating the correct battery direction 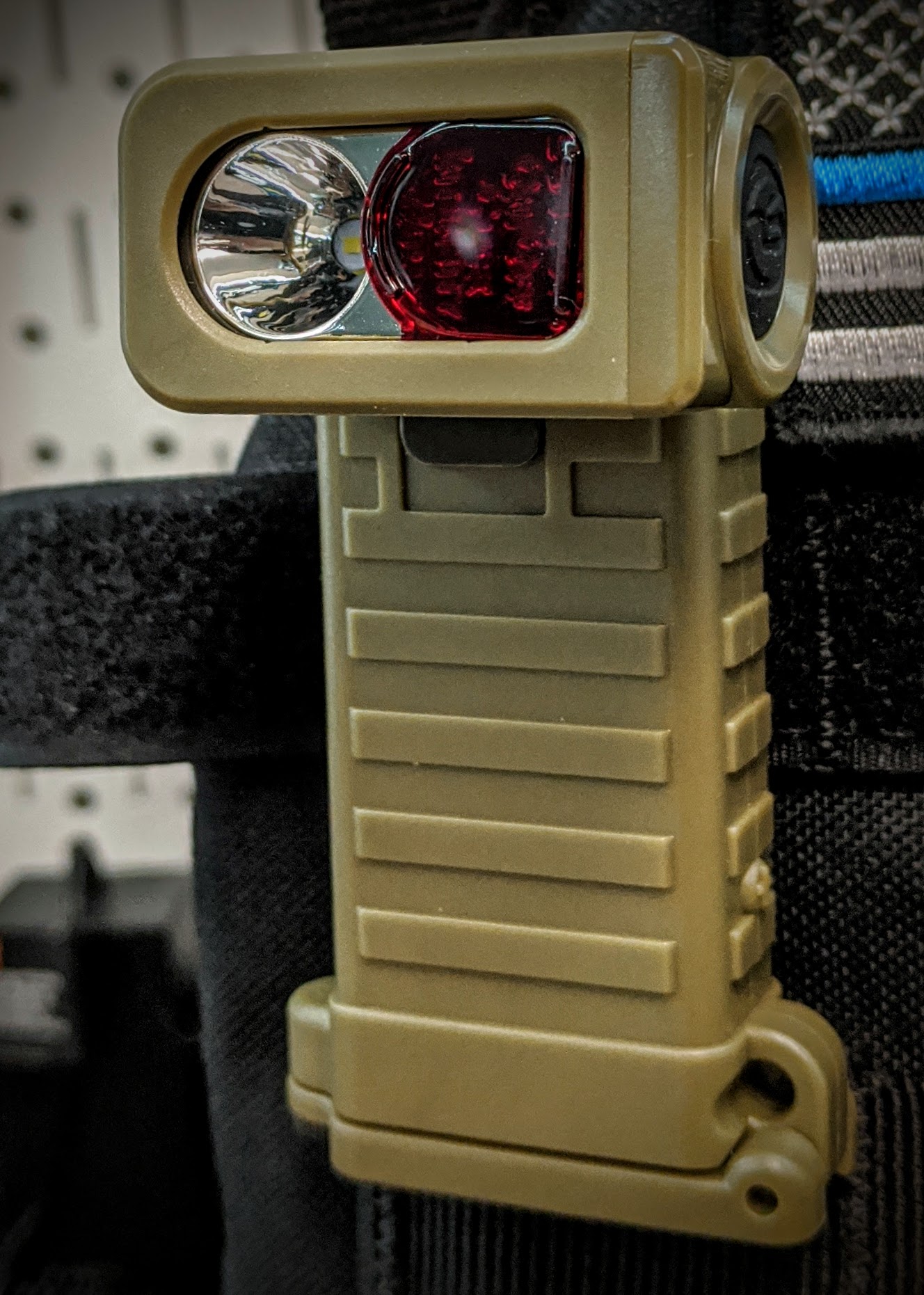 The specs on this light are a bit intriguing. It has a 55-lumen bulb, 8 hours runtime in high mode and it has a low-intensity mode which will last 90 hours. I found 90 hours was pretty incredible for two AA batteries. The head tilts 185 degrees and a slide in place red filter is installed on the lense. One thing I really enjoyed about this light is that it is IPX-7 waterproof. Meaning that it will take many years of aggressive abuse and hold up fine. If you doubt this, it is backed by a lifetime warranty. So if you wreck it, Streamlight will replace it for free.

Another intriguing feature in the specs of this flashlight is that it has a very strong spring steel clip which fits to MOLLE or helmet mounts. Now, I don’t have a helmet mount but I do see the indentation and the recess inside the spring clip that I’ve seen in many helmet mount devices but I can only verify that the molle clip works well and is very secure on my plate carrier MOLLE vest. 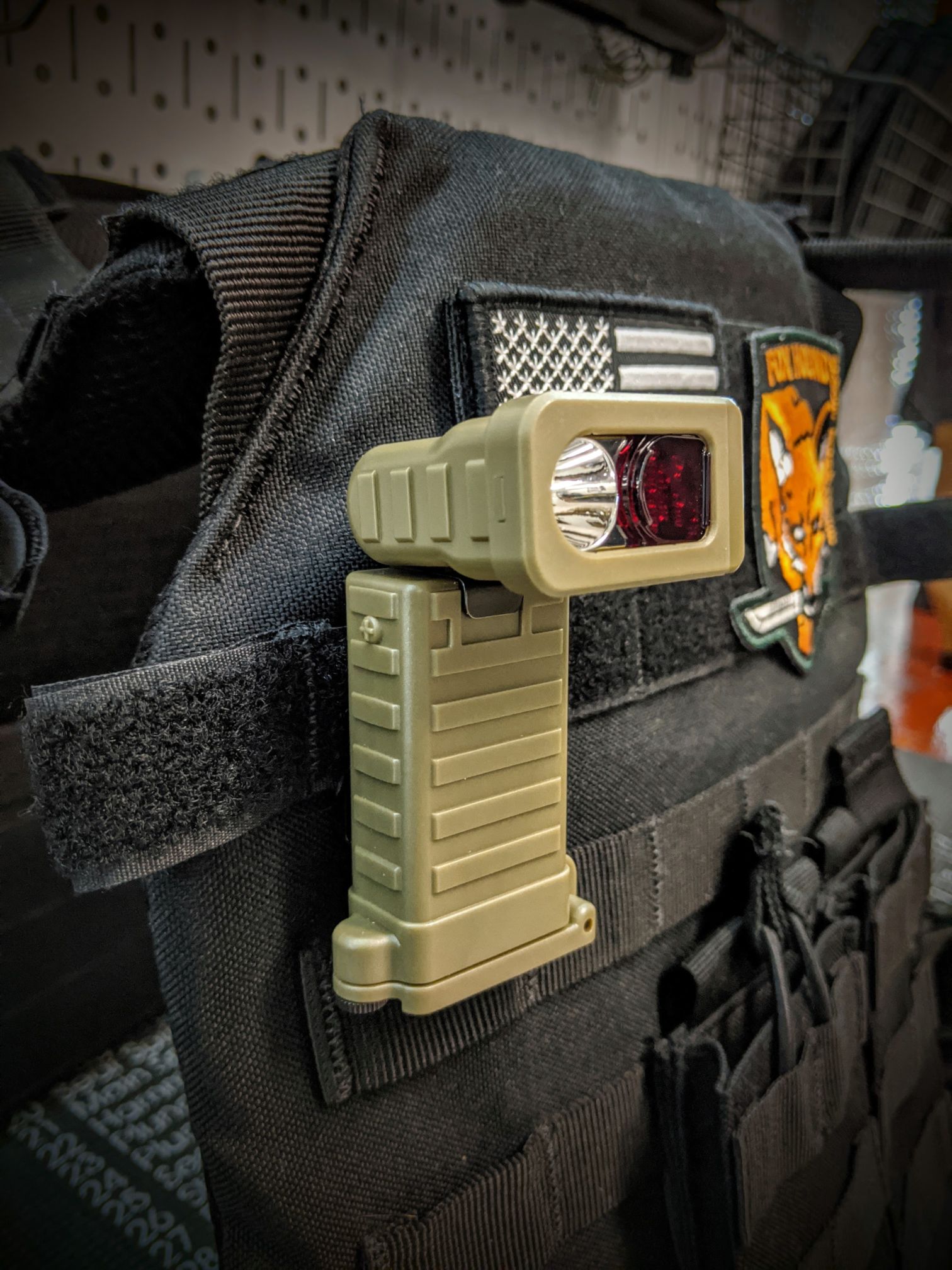 Late one night, as I woke up groggy, I made my way over to the bathroom to grab some medicine. Knowing that turning on the lights would disturbed my wife and also wake me up for a longer period than I desired, I thought that I should grab the Streamlight Boot. I want to try it out at night knowing that my eyes were accustomed to the dark 3 o'clock morning. I thought that this would be an excellent initial test for this flashlight. Putting the red filter in place and turning the light on I could easily find my way to the medicine cabinet to identify the correct medicine that I wanted to take versus the medicine that I definitely did not want to take at 3 o’clock in the morning. Turning the light off, I returned to the bed, and in a minute or two I was back to sleep, almost forgetting what had just transpired.

This short story sums up the practicality and the usefulness of this Streamlight Boot. What originally came off in understated specs and a small profile, I figured that this could be a basic camp light that I would keep around with many of the dozen lights I had scattered around the house late in the night. But it soon became apparent that this was a very specific, well-engineered, flashlight that has slowly become one of my favorite flashlights in my arsenal.

The reason that it was one of my most favorable flashlights is because it fulfills a void than none of my flashlights fulfills. That void is sufficiency. Unlike my dozen of other 100+ lumens flashlights, this flashlight is only 55 lumens bright. That is not very much, but you know it’s enough, and when you are trying to preserve your night vision, and you don't want to blind yourself while looking for tools or gear. It is exactly what you need to have. Furthermore, the intensity can be changed by holding the button on the side and intensity can be reduced further by putting on the red filter in place. This also helps preserve your night vision and is crucial in night operations and for getting back to sleep faster.

This is also sufficient for anything you’ll need around the camp, if you need a brighter light, you move the red filter and switch it to high intensity which allows you to see 30 to 50 feet away without difficulty. If you’re looking in your bag for some gear, before you head to bed, put the right filter in place then use the high-intensity mode to easily find what you need. If you wake up in the middle of the night and you need something and you’re not quite sure where it is, leave the right filter in place, and use the low-intensity mode. You have just enough light to find anything in your tent.

I would start off with the capabilities of this flashlight being that it is small, light, slim, low profile and easy to use. The controls are intuitive and it’s very ergonomic. In fact, as I write this review, I can’t help but play with the flashlight because it’s just a pleasure to hold and use. The spring-clip on the back is very tight and well built and the retention on the swivel head is sufficient enough to keep it in place during harder bumps. Having loose retention on the swivel head would allow it to flop around which is detrimental to the function of this flashlight. The button placement on the side is excellent and easy to use. 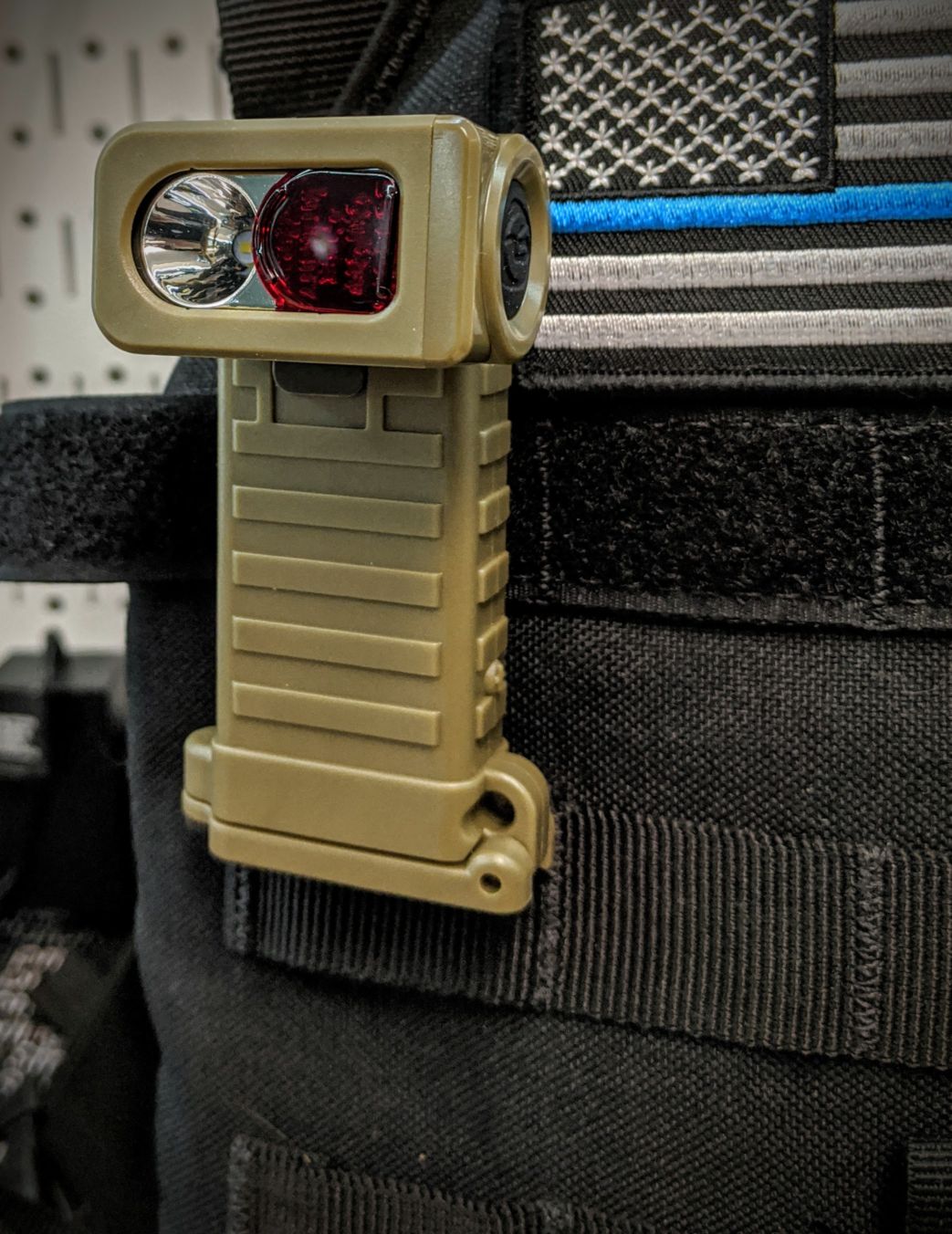 Even though I initially thought there would be a long list against this flashlight, that list went away as I used it. The 55-lumen bulb which struck me as substantially underwhelming ends up being perfectly acceptable and adequate for the purpose of this light. The slide in place red filter works perfectly... but I digress as I do need to get to a few issues I do have with the light.

One con is that the battery direction is not initially apparent when you take the light out of the box, this becomes more difficult as there are no instructions to help you along the process until you just have to figure it out.

The other con would be that the swivel head is slightly insufficient in the ability of a downward angle obtained when clipped to a molly in a vest. A 185-degree angle is excellent but when clipped to a MOLLE vest it gives it roughly 15 degrees downward angle while walking. This is enough to look ahead of you, but to look in front of your feet is more difficult and not suitable for this light when using it on a MOLLE vest or in a shirt pocket.

My Final Thought on this Streamlight Sidewinder Boot

I am pleasantly surprised by the capabilities and functionality of this flashlight. Not only did it exceed the expectations I had but it gave me a new love for flashlights and the simplicity of its function and form. This would be a flashlight that I will regularly use and will be at my bedside replacing the brighter flashlights that I have been accustomed to. It’s sufficient to clear a house, yet capable enough to shine down the driveway in the middle of the night. I can sum up my final thoughts with this flashlight as being, such a joy to use on nights that I scramble to find assistance while rummaging through the dark.