Calico Liberty III Pistol is one of the series of pistol-caliber weapons produced by Calico. Specially made for those who love to have lots of ammo in their Magazine. 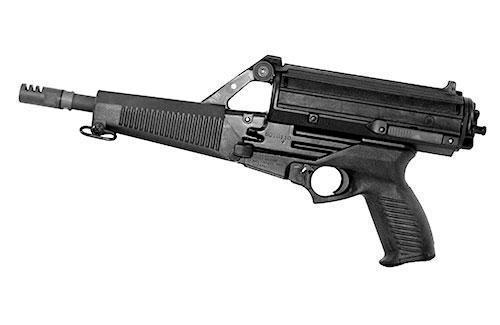 The Calico submachine guns are somewhat mysterious and quite notorious in both design, concept and appearance.

The key properties of Calico firearms were extremely large magazine capacity combined with slim profile and ambidextrous handling. First designs, introduced by the US based company Calico Light Weapon Systems (LWS) circa 1990, were intended for both Law Enforcement and Military markets (in either semi-auto or selective fired form, in 9mm) and for civilian market (semi-auto only, in pistol or carbine form, in 9mm and .22LR versions).Sales of these guns were not so bright, and the US Assault Weapons Ban of 1994,which limited magazine capacity for civilian guns to 10 rounds, further impacted the future of this weapon. Apparently, military and police sales during late1990s were insufficient, and it seems that the Calico LWS company went out of business. Original design of the helical, large capacity magazine was invented by the Michael Miller and Warren Stockton by the 1985, and refined by the 1988. Calico company produced 2 basic designs, one in .22LR (models 100, 105 and 110), and another in 9mm Luger (models 900, 950, 960, Liberty). 9mm models could be easily distinguished by the ejection chute, located just ahead of the trigger guard, and opened to the bottom. .22LR models, on the other hand, have trigger guards with slim front edge, and ejection ports on the side of receivers. Modern Firearms - Calico

The Calico M950 has a subtle, but long history in the world of cinema and video games. It's most notable appearances would most likely be in the 1997 movie “Tomorrow Never Dies,” “Total Recal” - 1990, and “RoboCop 2 & 3” - 1990 & 1993. with variation appearing often, and across the board of cinema, games, and anime. Most consider it to be an “ugly” firearm, I contest that is is an beautifully designed firearm.

Calico remains one of the largest manufacturer of high capacity magazines and capable firearms. Boasting 50, and 100, round magazines for their line of pistols and carbines. The M950 is the only pistol capable of 50 rounds, straight from the manufacturer. With the seamless magazine system, the M950 can be upgraded with a 100 round magazine, retaining its ergonomics, and without sacrificing balance and user control. The ingenious helical magazine design offers the ability to disengage the internal spring, allowing for indefinite storage of a loaded magazine, while still having the option for rapid deployment. Mag Reference Along with the sophisticated magazine design, the military version (M960), offers select fire fully automatic and pistol front grips. All Calico firearms are designed so that the center of mass sits directly above the main grip, allowing for improved control in semi and fully automatic modes. The roller-delayed blowback operation serves for reliability and simplicity, notably found in the H&K G3/MP5 firearms. Rumored that there are a few pre-86 fully automatic M690's available, most were produced after May 1986, and not availabel to the public. NFA Law Due to the design of the Calico firearms, the Clinton ban was very destructive to the company. After the ban was lifted, the company made a comeback. In doing do, they re-branded their 9mm line as the “Liberty” series. Calico Light Weapons Systems continues to make strides in firearm technology as they develop 9mm conversions, and other calibers to their pistol lines.
Calico Light Weapon Systems
M960
Modern Firearms